Since the appearance of the first digital copy of the holy Quran, there had been substantial effort to produce an accurate Quran text, but due to some difficulties (some of which are listed below), these efforts were unsuccessful in many of the cases, and unfortunately, the Quran texts appeared in a majority of Quranic websites and applications were suffering from lots of errors and typos. 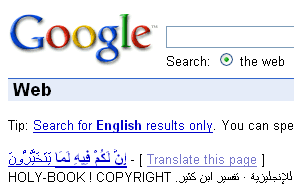 These erroneous Quran texts were so rapidly spread over the Internet that finding the correct form of Quranic verses had became almost impossible without referring to a verified printed manuscript. For example, when we were searching Google in 2007 for the verse 38 of Sura Al-Qalam which is إِنَّ لَكُمْ فِيهِ لَمَا تَخَيَّرُونَ, the first result that we were receiving was a wrong form ending with the word يَتَخَيَّرُونَ as shown in the picture to the right.

This terrible situation made us to launch the Tanzil project to produce a highly verified error-free Quran text, and make this text available to the Quranic websites and applications to prevent further spreading of the erroneous Quran texts.

Typos in some existing texts

Many of the digital Quran texts publicly available on the web have been suffering from lots of typos, mainly due to the following facts:

How precise is Tanzil Quran text?

In the Tanzil project, we have integrated several previous works done in a number of Quranic projects to obtain a unified Quran text, and brought the text to a high level of accuracy by passing it through several manual and automatic verification phases. The lengthy work that lead to the final Tanzil Quran text is summarized in the following three steps:

We extensively used the help of a group of experts including Quran specialists and Hafizes in order to assure the correctness and preciseness of the obtained Quran text. Our Quran text is now used in major Quranic websites and projects, with several millions active users per month. Despite this high volume of users, we have received no typo report since the release of the first version of the text in 2008. The accuracy of the text has been also reconfirmed by several projects that are actively using Tanzil Quran text.

Who is using Tanzil?